One of our favourite saloon cars of all time the Mercedes-Benz 190E 2,5-16 Evo II turns 30 today. It was on this very day in 1990 that the 190E 2,5-16 Evolution II (to give its full name) made its debut at the Geneva Motor Show. The high-performance sports saloon was the road-legal basis for the DTM racecar of the same name. Mercedes-Benz only built 502 cars, to meet the homologation threshold, and every one of them was finished in blue-black metallic.

The Deutsche Tourenwagen Masters (DTM) or German Touring Car series was one of the most hotly contested in the world. Many German brands were involved, as well as a few Europeans, and it was a matter of pride for the Germans to win on home soil. Chief rivals in the championship were BMW and Mercedes, each throwing vast sums of money and resources at the series. In 1990 Mercedes launched the 190E 2,5-16 Evolution II with 173 kW. It was a far cry from the base model 190E 1,8-litre with 80 kW.

Click here to read our column on the disappearance of road-going racecars. 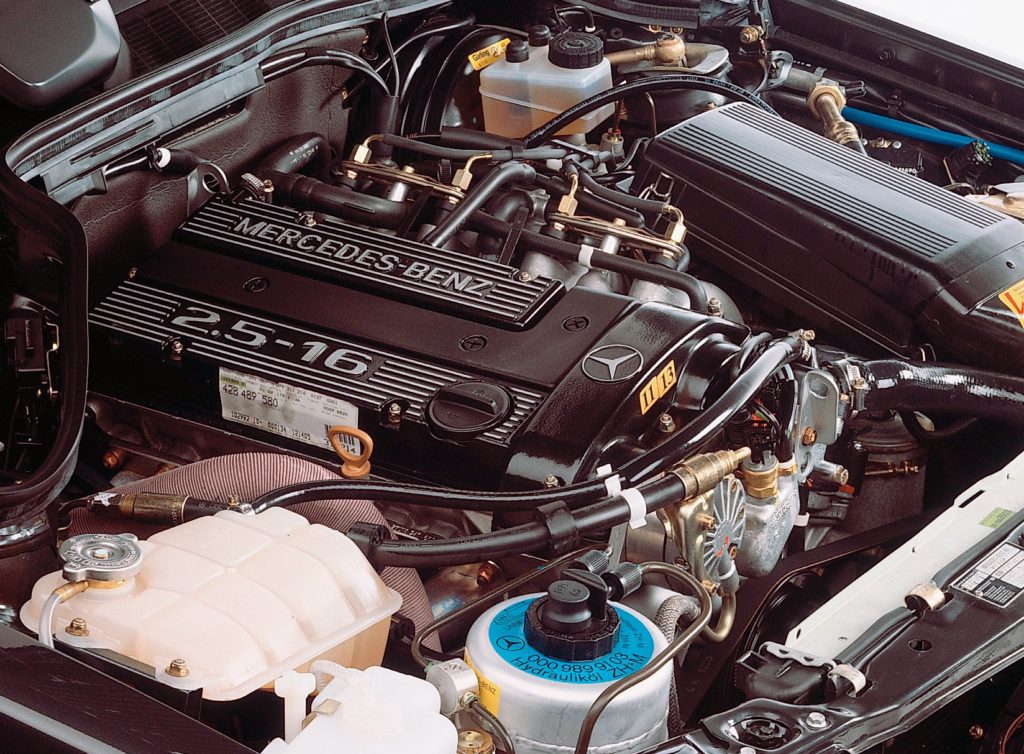 Evo II was the second evolution of the race-bred machines. In this guise, the four-cylinder M102 engine was upgraded under the direction of Dr Jörg Abthoff, head of advance engine development, and his colleagues Rüdiger Herzog, Dag-Harald Hüttebräucker and Rudolf Thom. The revised engine had a shorter stroke (82,8 mm) and a larger bore (97,3 mm) than the engine in the 190E 2,5-16 model. Maximum engine speed was raised to 7 700 r/min. This was made possible by reduced conrod mass, four instead of eight crankshaft counterweights and conversion of the camshaft drive from a duplex to a simplex roller chain. The engines used in the DTM racers were based on the in-line four-cylinder units used in the production vehicles. Output was raised from 173 kW to 274 kW in the racecars.

Click here to read about track-only supercars Part 1 and Part 2.

Evo II, as it became known, stood out from previous models thanks to a massive box-shaped rear wing. The spoiler had a retractable flap on the upper crossbar. The lower spoiler strip at the rear could be tilted and the front spoiler was adjustable in two stages. The aerodynamic modifications provided additional downforce up to 57,1 kilograms on the rear- and 21,2 kg on the front axle. Larger, 17-inch alloys were also adopted. Under the skin, the Mercedes-Benz 190E 2,5-16 Evo II was fitted with additional body bracing.

The Evo II made its race debut on 16 June 1990 on the Nürburgring Nordschleife. Kurt Thiim took the car’s first victory on 5 August 1990 in Diepholz. In 1991, Klaus Ludwig was DTM runner-up in the Evo II, and in 1992, he won the drivers’ championship ahead of other 190E pilots Kurt Thiim and Bernd Schneider. In the 1992 championship season, Mercedes-Benz drivers won no less than 16 of a total of 24 DTM races with the Evo II cementing the cars’ legendary status.

Watch the 190E Evo II and its rivals in action in the video below.