The Lamborghini Urus driven by Double Apex on its national ride and drive event.

It has been some time since we’ve slid behind the wheel of a Lamborghini. Earlier this week we had the opportunity to drive not one, but two models from the house of Rampaging Bulls. Lamborghini SA invited us to sample the Urus SUV and its recently updated ‘entry-level’ sportscar, the Huracan Evo (review to follow).

Lamborghini was one of the latecomers to the SUV party. The Italians must have been hesitant to enter this unknown space, but at the end of 2019, they would have been popping bottles of Prosecco in celebration. Year-on-year sales of the brand jumped an incredible 43 per cent. Total volume went up from 5 750 in 2018 to 8 205 vehicles worldwide in 2019. Just under 5 000 were Urus, when Lamborghini was quietly targeting 3 500 Urus sales. A vast number of those buyers are new to the brand, having never considered Lamborghini ownership until this third model line was launched (Huracan and Aventador being the others).

The Urus ST-X is a racer concept that will form the basis of a race series.

The short answer is: like no Lambo that’s come before (the short-run, militaristic LM002 doesn’t really count). Thankfully, when embarking down this road the folks over in Sant’Agata Bolognese had some help from their cousins in Germany. Shared underpinnings in the form of its core architecture means that the cost of developing the Urus was not astronomical and that Lamborghini was not starting on square one of its SUV path.

View bespoke images from our visit to the Lamborghini museum at this link.

Of course, it still had to be a Lamborghini in demeanour and character. In terms of appearance the Urus borrowed cues from the stillborn Estoque four-door coupe. The Urus is no shrinking violet; it is large and has oodles of presence. In that regard, the Urus isn’t closely related to its siblings, not even in that sloping roofline. In detail, however, there is plenty of commonalities. Lamborghini’s ‘Ypsilon’ styling theme is every everywhere from the surfaced flanks to the massive alloys, to parts of the interior. Speaking of the interior…

Check out this unlikely Huracan-based off-roader.

It may be an SUV, but the cabin layout and feel is very much like that of a sportscar. Each front occupant feels cocooned on their side of the cabin as you sit low with the window line at one’s shoulder. That’s not to say the cabin is cramped. I’d say it’ll comfortably accommodate a four-member family of larger stature and their luggage with ease. On the facia is Lamborghini’s HMI (human-machine interface), or infotainment system. All controls are handled by two high-resolution touchscreens. If I were not looking down to the ground from the captain’s chair I would not easily guess that this vehicle is over 1,6 metres tall and over five metres in length. 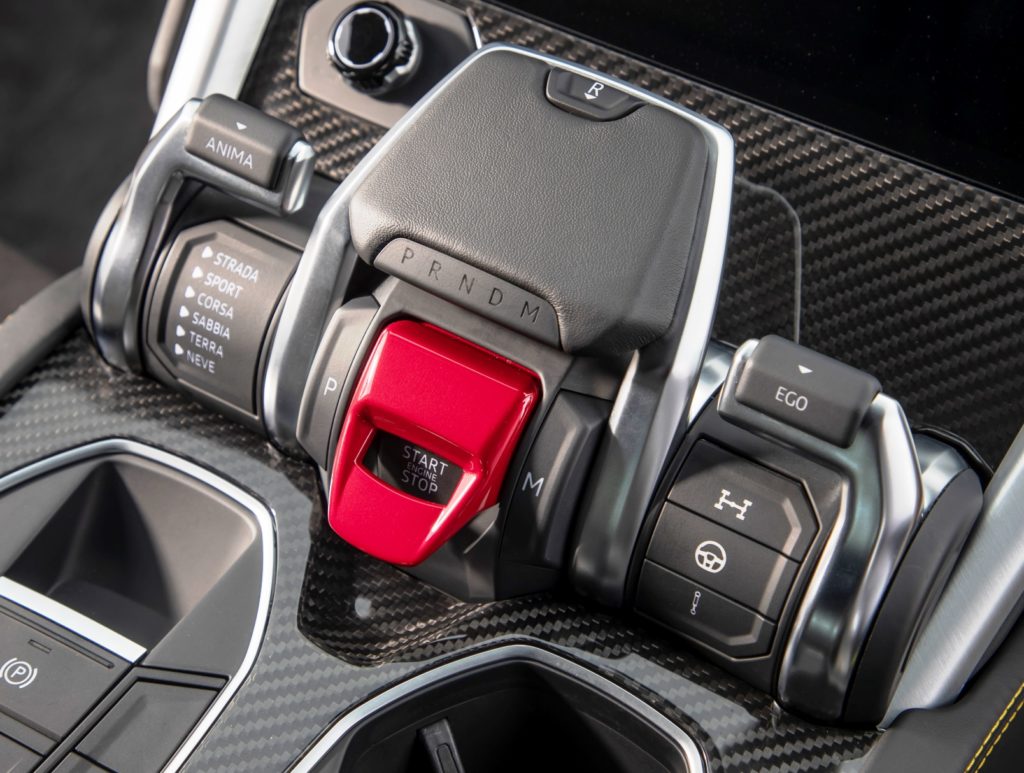 A wide central tunnel houses myriad controls, including the various drive modes. The Urus comes with no less than six modes – Strada (Comfort), Sport, Corsa (Track), Neve (Snow), Terra (Off-road) and Sabbia (Sand). If you don’t like the presets, you can also pick and choose your favourite settings for the steering, powertrain and suspension via the Ego mode. Our drive route consisted only of tar so we didn’t explore any of its off-road prowess.

But how does it go?

In my worst Italian accent: Eeeenncredeeebooool. The driving experience, especially at pace is eye-widening and begs belief. From the moment you throw the Urus through the first corner you know that it’s been injected with Lamborghini DNA. To make something of this size and this mass (over 2,2 tons) behave the way it does the R&D team went deep into their bag of tricks. Systems involved in making the Urus feel lighter and smaller than it includes active rear-wheel steering, a torque-vectoring rear differential, and active anti-roll bars. It’s all controlled to bring you a driving experience that is unparalleled in the segment. (Your move Ferrari…).

The active rear steering and active rear diff’ help to create a proper rear-wheel-drive sensation. With the massive rubber pointing towards your intended line of travel, you can unleash almost all the power and drive out of any corner hard as the outer and rear wheels claw into the tarmac and rotate the car. I’ll bet drivers without major driving titles to their names will probably be quicker through any set of corners in the Urus than in the more edgy Huracan.

Thanks to the various drive modes the focussed dynamics don’t interfere too much with regular, open-road driving. Switched to the more sedate Strada option from Sport or Corsa and the Urus easily plays the role of mum’s taxis (which we’re sure it does) with little compromise. Oh, and if you really find yourself in trouble the Urus has the biggest brakes fitted to any road car as standard. Carbon-ceramic discs measure 440 mm, clamped by ten-piston calipers, at the front, and 370 mm rotors acted on by six-piston clamps at the rear. Lambo’s press material says the SUV can brake from 100 km/h to standstill in 33,7 m. 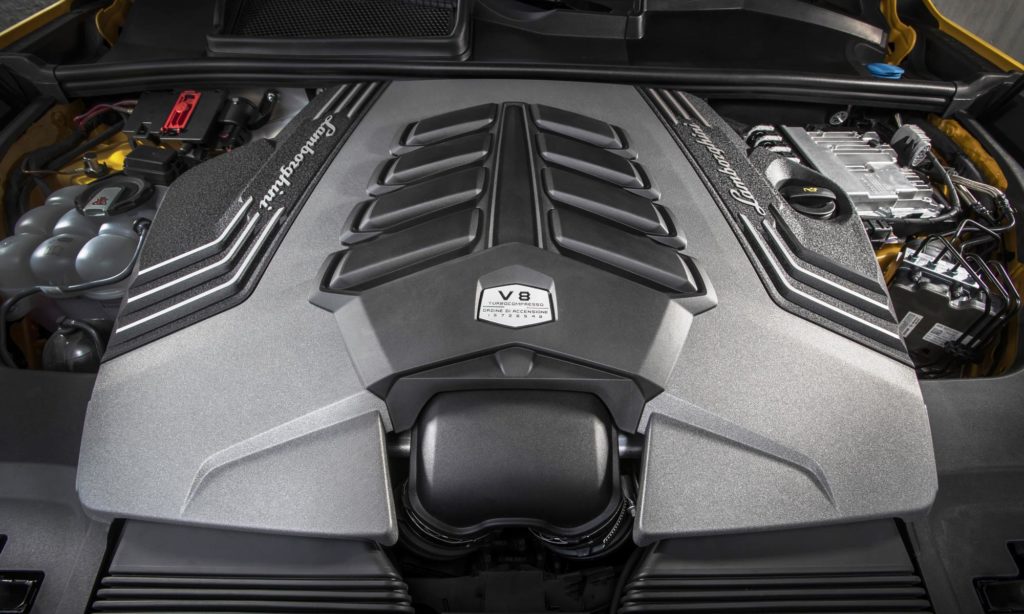 I’ve intentionally left the bit about the engine to the very end because it is, in my view, the most impressive aspect of the Urus, over and above the already scintillating driving experience. Lamborghini has been steadfast in its use of naturally aspirated engines. The shrieking motors we’ve become used in its sportscars over the years have overlooked in favour of the firm’s very first turbocharged production model. Under the creased bonnet of its SUV lies a twin-turbocharged V8. The engine has been borrowed from the parent company’s parts store but recalibrated for duty in the Urus. Headline figures are 480 kW and 850 N.m of torque, the latter at a lowly 2 250 r/min. Lamborghini says its largest Bull can sprint from 0-100 km/h in sportscar-crushing 3,6 sec and from 0-200 km/h in 12,8 sec. Given enough space, it’ll do 305 km/h.

Click here to read about Track-only Supercars, including the Lamborghini Sesto Elemento.

The force-fed bent eight has none of the histrionics of the naturally aspirated V10s or V12s. Redline is at a rather ‘sedate’ 6 800 r/min. The sounds emitted from the quad tailpipes are more basso profundo than soprano, with crackles and pops on a trailing throttle in the racier modes for effect. Power delivery from the motor is relentless. If you mash the throttle in any gear, at just about any speed it tries to warp space. The eight-speed torque converter can drop several gears at once, punching you in the kidneys and pinning you to the seat as the large car tries to head-butt the horizon. It’s eye-widening every time, and totally addictive.

When the Lamborghini Urus was launched in 2018 some may have questioned the future success of the model. Did the world really need a Lamborghini SUV? Weren’t there enough options on the market already? Well, 4 962 buyers answered that question. What do they get for their hard-earned money? The Urus has ably reset the bar in terms of what an SUV can do and what some customers are really after. Until the likes of Ferrari (that is working on its own SUV) develop a rival, the Urus remains the only Super SUV on the market, and Super it really is.