BMW is one of the few automakers that does not offer a bakkie/pick-up/ute, call it what you wish, in its sales listings. That doesn’t mean that there aren’t plenty of BMW bakkies around. While researching for this article we stumbled upon several varieties of BMW pick-ups around the world and bring you just a few highlights. If you have images of other (real) BMW bakkies, not renderings, post them below the link to this story on our Facebook page.

You can view more galleries at this link and don’t forget to follow Double Apex on Instagram. 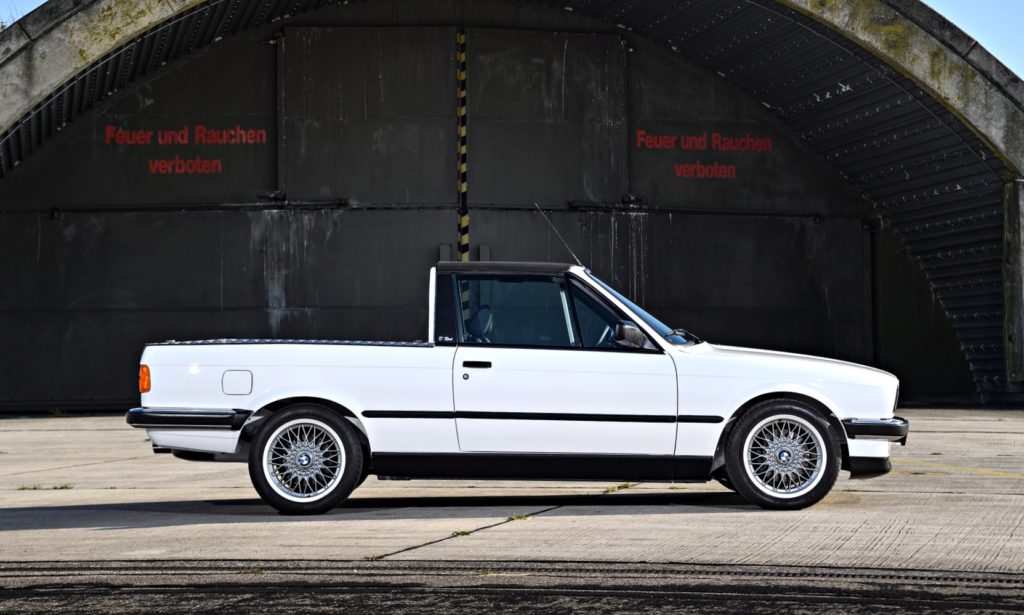 We’ve decided to skip the E92 M3 bakkie built by BMW as it is well known. Instead, we bring you one they made earlier. The E30 M3 pickup was created by the company’s M division as a parts hauler. The guys at M started with an M3 convertible and lopped off everything behind the front seats. In its place is an aluminium-clad load bay. Under the skin, you will find the original M3 engine, suspension and braking system. Read more about other M3 concept cars at this link. 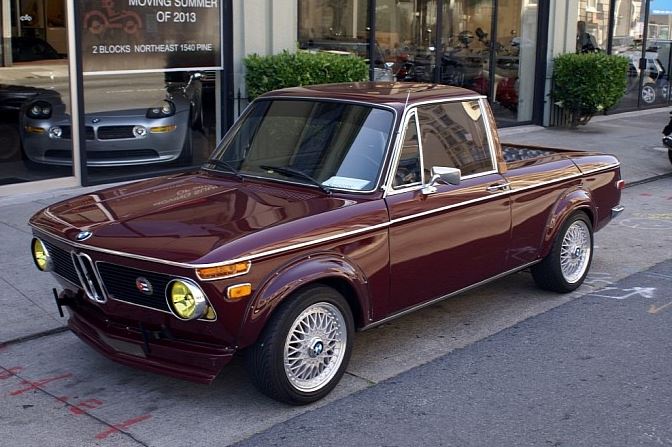 This 1971 BMW 2002 is a most unlikely pickup. It was created by a German repair shop from a bare shell. When its transformation was complete they dropped in a BMW-sourced 2,5-litre inline six-cylinder that transmits power to the rear wheels via a five-speed manual transmission. 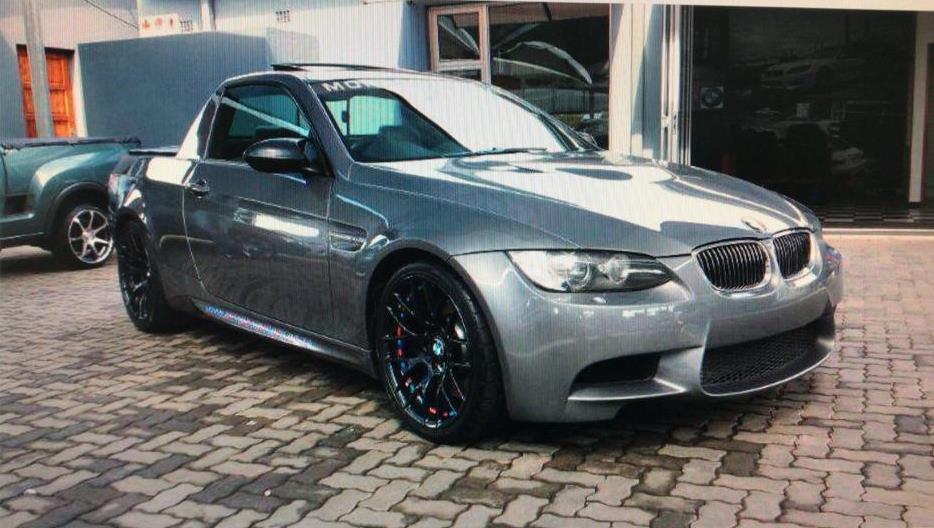 This E92 generation M3 was built right here in SA by a car dealer in Johannesburg. A second-hand M3 was used as the starting point for the conversion. An Opel Corsa roof was used, along with its rear sliding window. Once the bodywork was completed the car was sprayed in an original BMW shade. A supercharger was bolted to the 4,0-litre V8 motor for a total output of over 460 kW, up from 309. With a manual transmission, this must be a hoot to drive. Learn about the power rating of the upcoming M3/4 by clicking here. 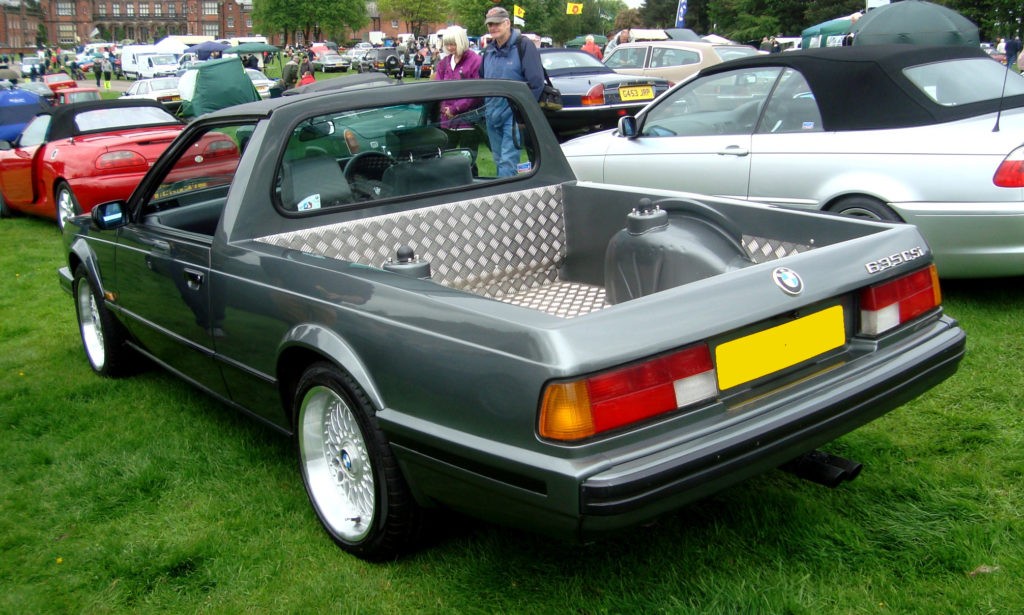 The 2002 wasn’t the only classic to get the bakkie treatment, this 635CSI coupe now also features a unique roofline. We certainly hope this rare UK-based 6 Series was involved in some form of accident, rather than a perfectly good car being chopped up. Read our exclusive interview with the boss of BMW M Division at this link. 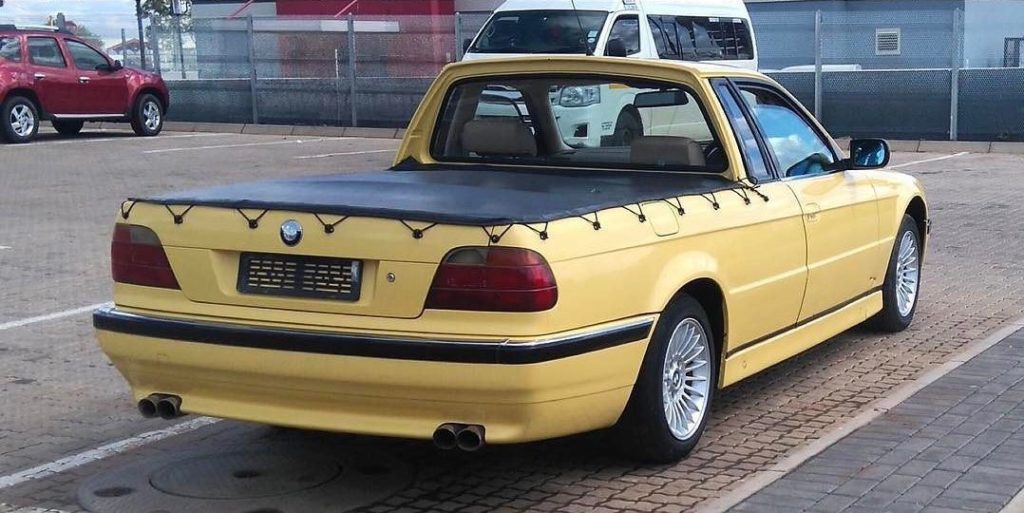 We came across several BMW 7 Series pickups while online and two that were built on local soil. We don’t know much about the yellow car, except that it’s based on an E38 generation 7. The white car has an interesting story. Supposedly, the owner was being offered a ridiculously low trade-in on his F01 730d so he decided to keep it and have a little fun. Out came the angle grinder and the end result is what you see here. It must be the most comfortable way to take the garden refuse to the local dump. Check out a V16-powered BMW 7 Series development car at the link. 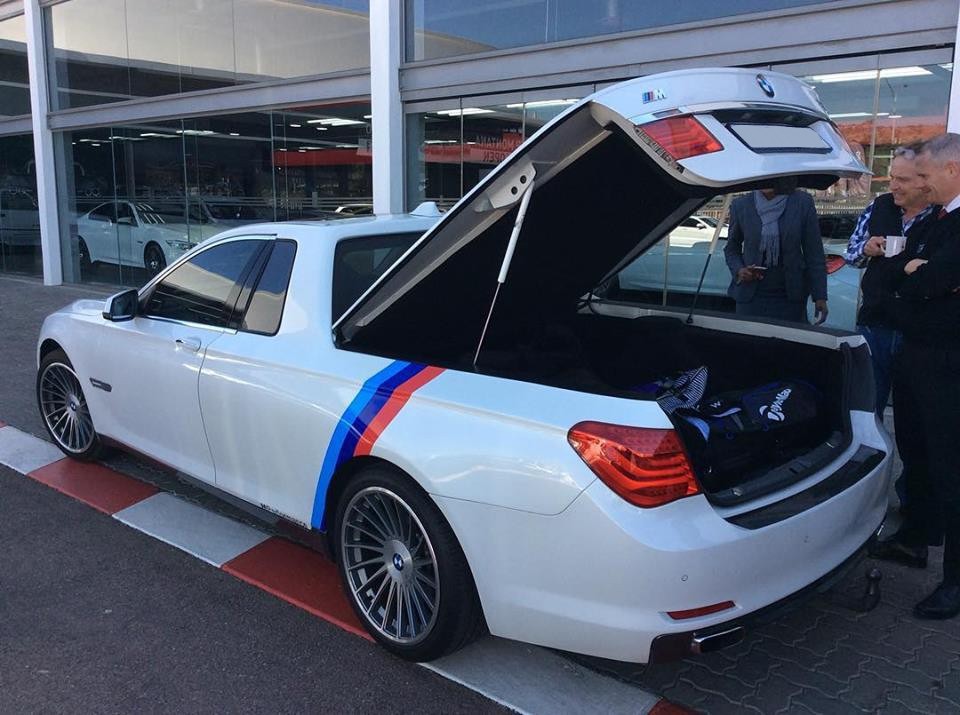 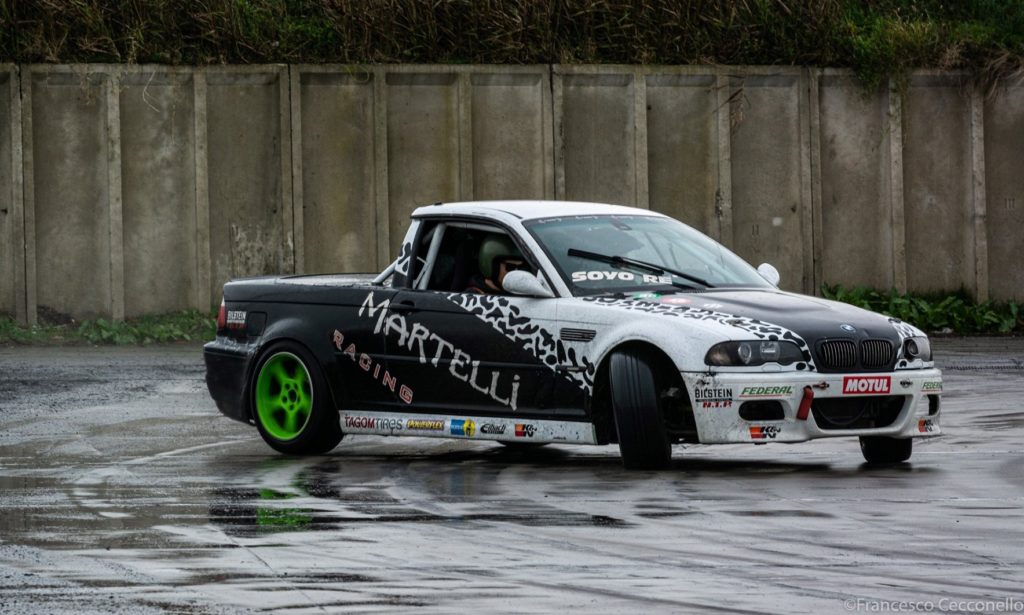 Martelli Racing in Italy had a great idea to make their drift car more tail-happy, they removed the rear cabin. The car still has the original inline-six, but thanks to mass reduction over the rear axle and some added bracing, it’s now a drift maestro – FANTASTICO! 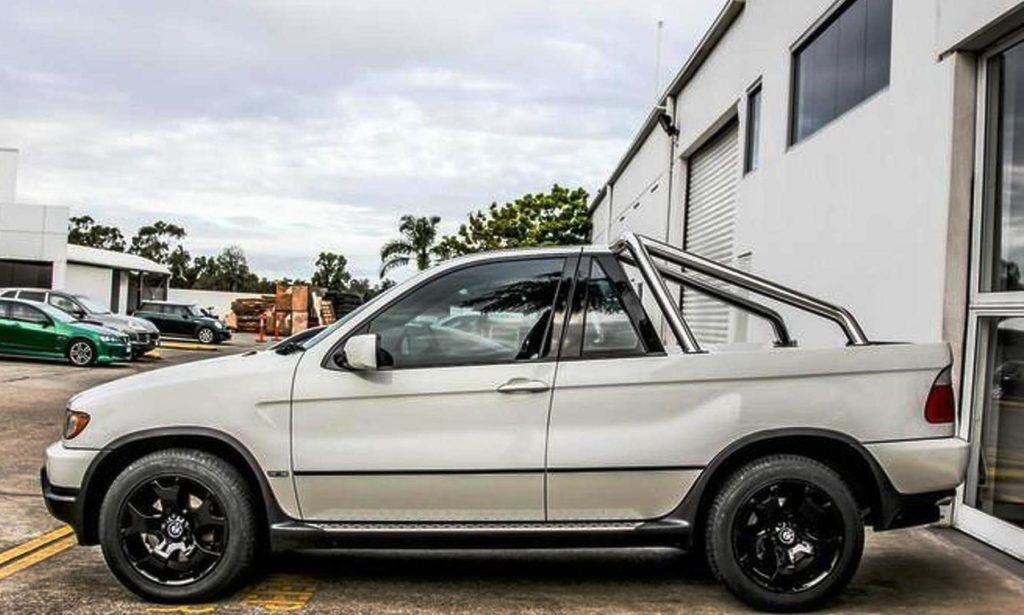 A BMW dealership in Australia transformed a first-gen X5 into a pickup. They took a pre-facelift E53 X5 30d and removed the doors and section of the roof. Chrome bars over the new load area add some machismo. Read our driving review of the latest BMW X5 M50d at this link. 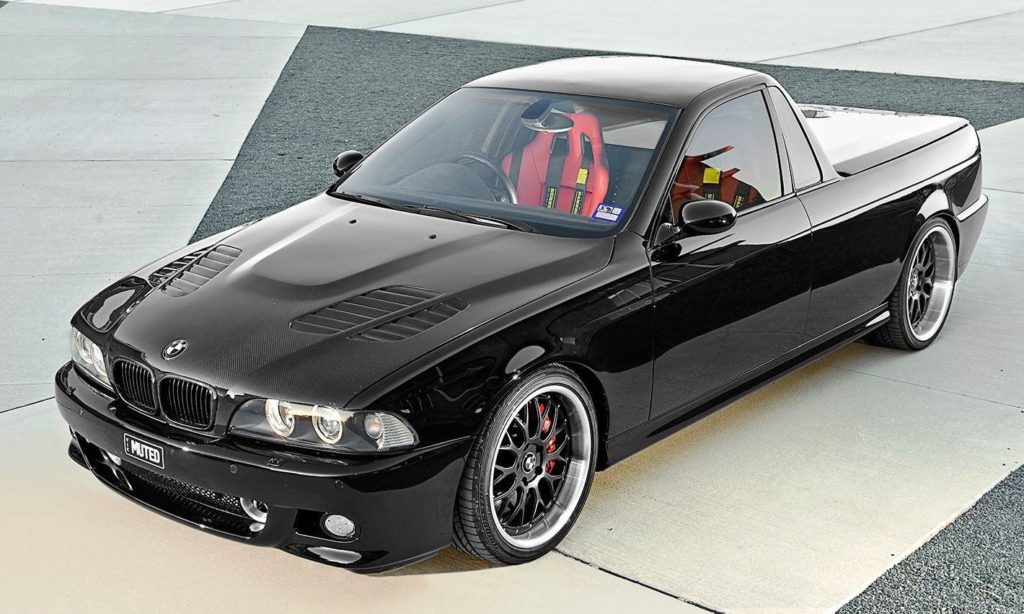 We’ve stumbled across quite a few 5 Series pickups while researching this story. The M5 featured here is one of the most complete and neatest of them all. Australian pro-golfer M5 Stuart Appleby is a big fan of utes (Aussie speak for bakkie, the weirdos). He started with a second-hand, but undamaged E39 M5. Over the course of several years the super-saloon was dismantled, then rebuilt to ride and feel like an OEM conversion. Additional bracing was used to ensure it lost none of its dynamic edge. Once the car was tranformed the naturally aspirated V8 was uprated from 294 to 343 kW. 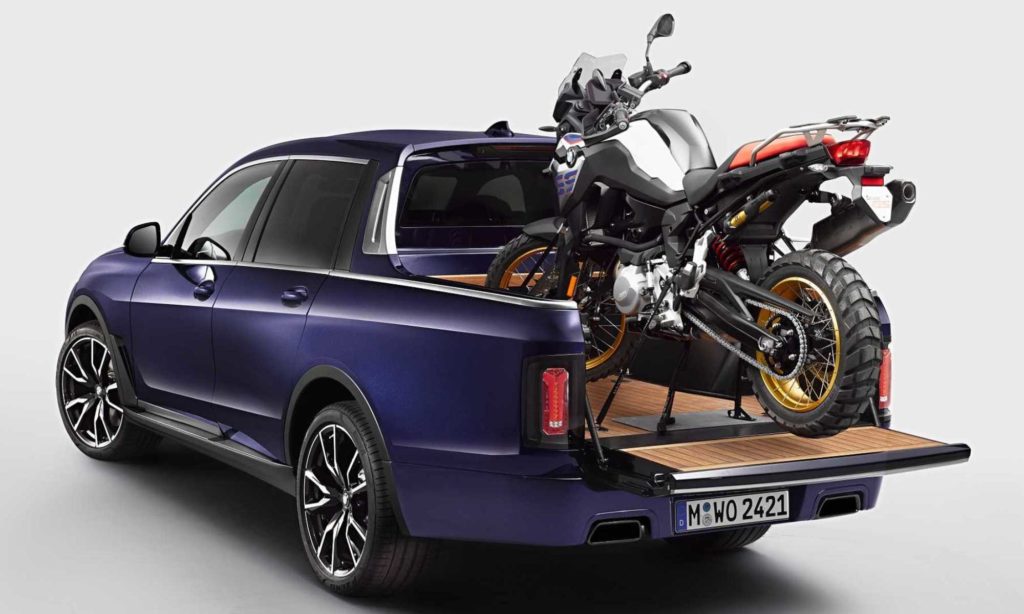 This is the company’s most recent pick-up creation. The one-off BMW X7 bakkie was put together by BMW trainees in cooperation with the Concept Vehicle Construction and Model Technology divisions at the BMW Munich plant. The X7 bakkie is based on BMW X7 xDrive40i. The project uses handcrafted teakwood cladding for the loading area. It has been used as a demonstrator at several BMW GS bike events.