A few weeks ago the Michael Schumacher documentary debuted on a streaming video service. Many Formula One fans who may have not followed the sport for a long time were unaware of the details of the German’s F1 career. To celebrate his achievements a permanent showcase was opened in Cologne, Germany, near his hometown of Kerpen in the shape of the Michael Schumacher Museum.

The mini-museum showcases the career of the seven-time F1 world champion. It is housed at Motorworld Cologne Rhineland has 12 Formula 1 cars, trophies, helmets and race suits from his two decades at the pinnacle of motorsport. Michal M, friend and reader of Double Apex visited the Michael Schumacher Museum and sent us these images to share with you. 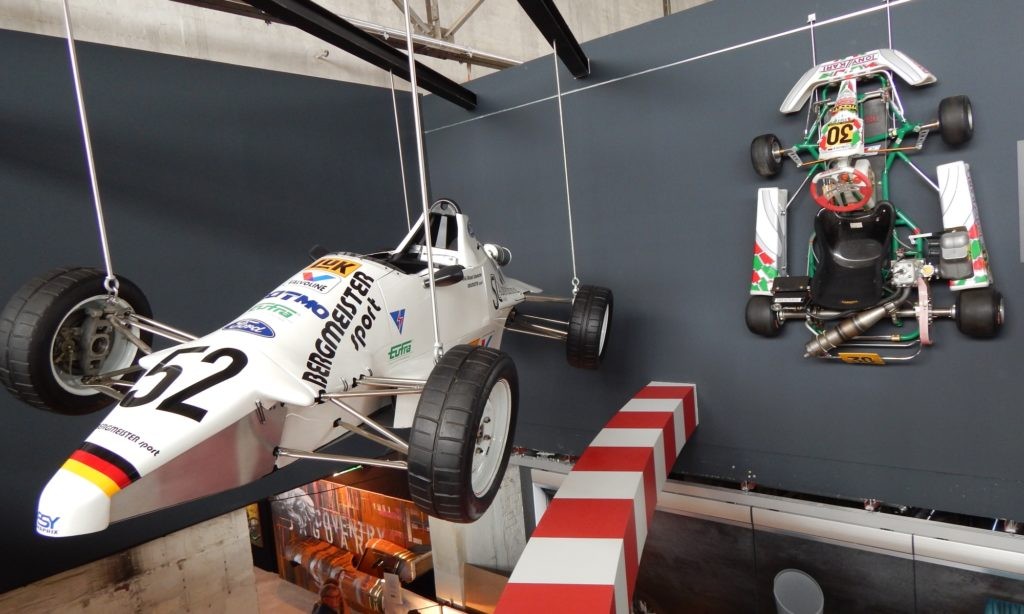 Like most F1 stars Michael’s career started with karting and quickly progressed to single seaters. Here is one of his early karts and a Formula Ford. 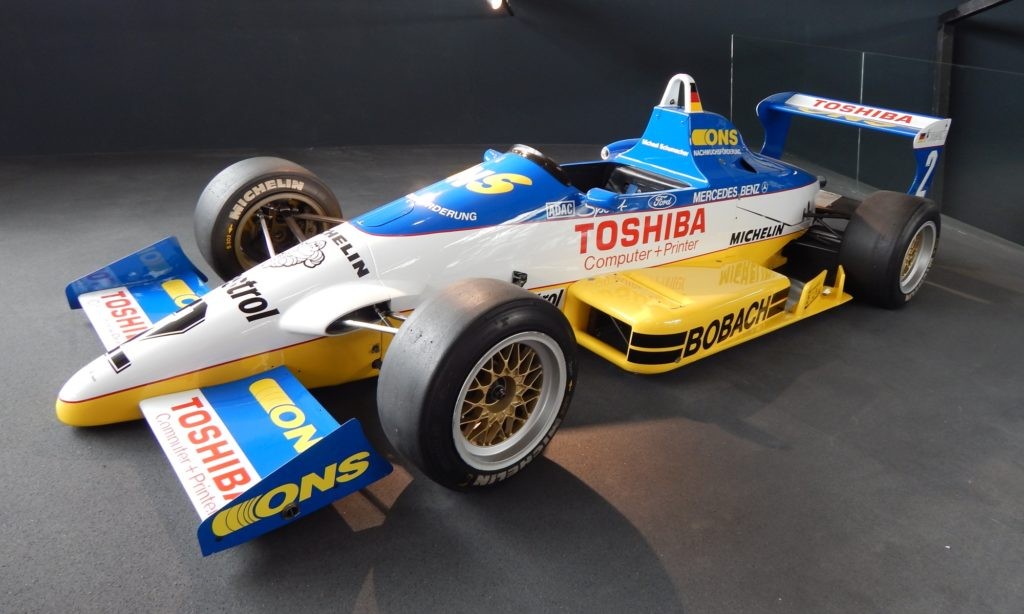 You can see from the side of this ‘wings and slicks’ racecar that Schumacher was a Mercedes-backed driver even during his early years in the sport . 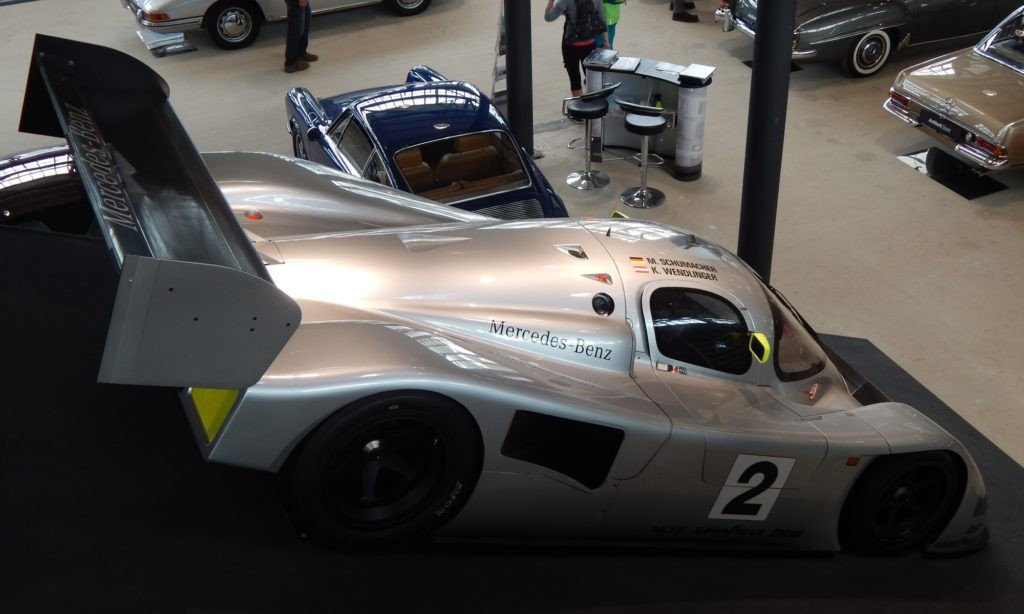 The Mercedes young driver programme helped build the careers of several promising drivers, most of whom made it onto the F1 grid. Without a Formula One team of its own at the time the breeding ground was the world of sportscar racing. Schumacher shared this car with Karl Wendlinger. 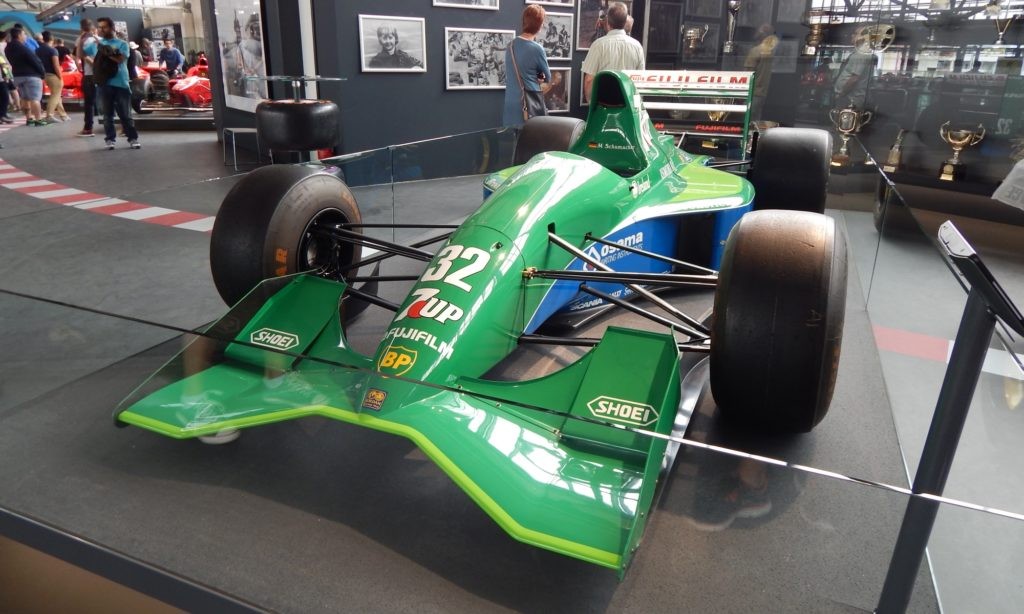 F1 debut: Schumacher’s F1 career, famously, began at Jordan. The young German impressed on his debut by qualifying 7th, four places ahead of a more experienced teammate at a track he’d never raced on in a car he’d never driven before. Jordan only managed to use his services for one race before Michael was snapped up by Benetton. That very car went under the hammer earlier this year, as you can read here. 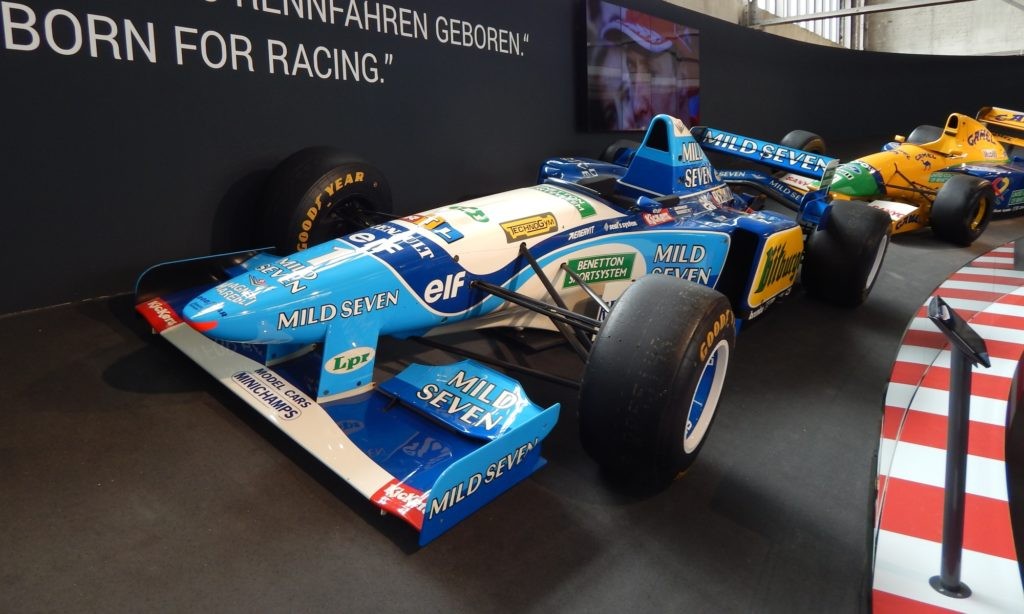 The championship-winners: After a few years with the team backed by an Italian fashion label, Schumacher claimed the driver’s title twice, first in 1994, which he then successfully defended in 1995 before moving to Ferrari.

Catch some beautiful retro F1 Monaco footage at this link. 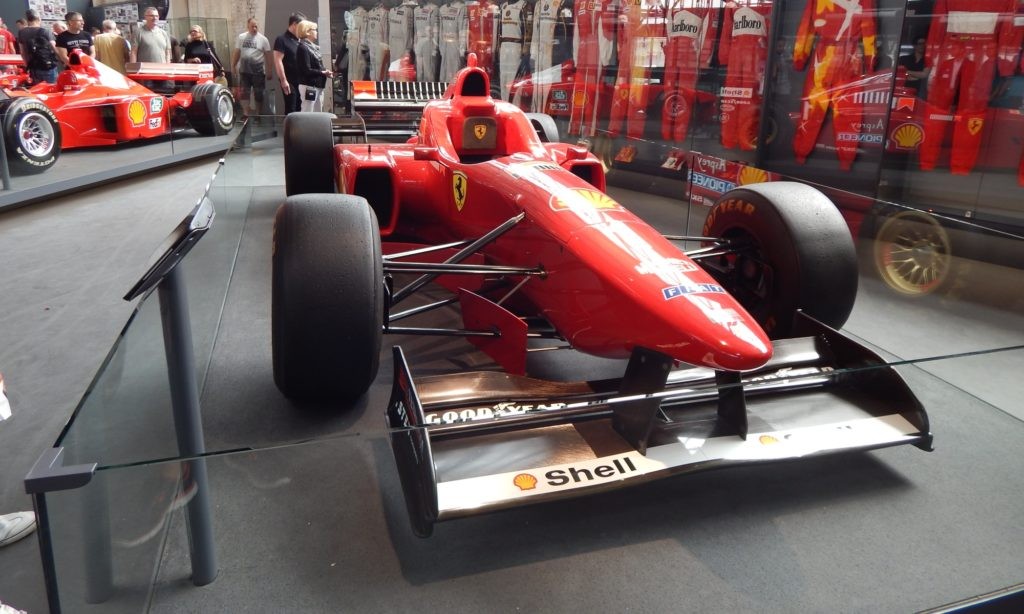 Record-breaking: Schumacher and Ferrari re-wrote the F1 record books when they started winning together, from 1996 already. The floodgates opened in 2000 with Michael claiming five successive titles. There are no fewer than seven Ferraris in the collection. An early car is pictured above and a later model below. 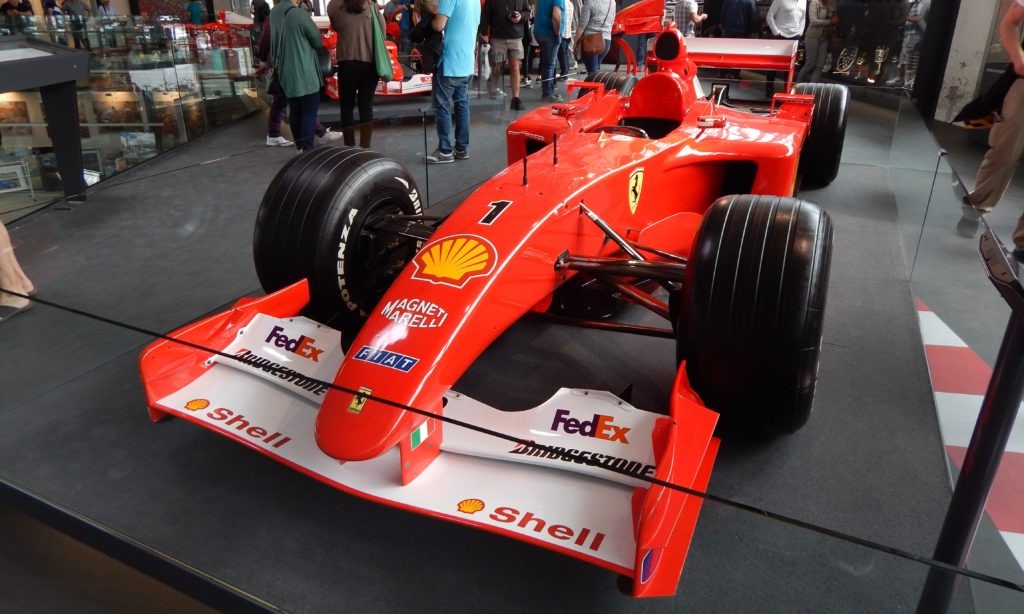 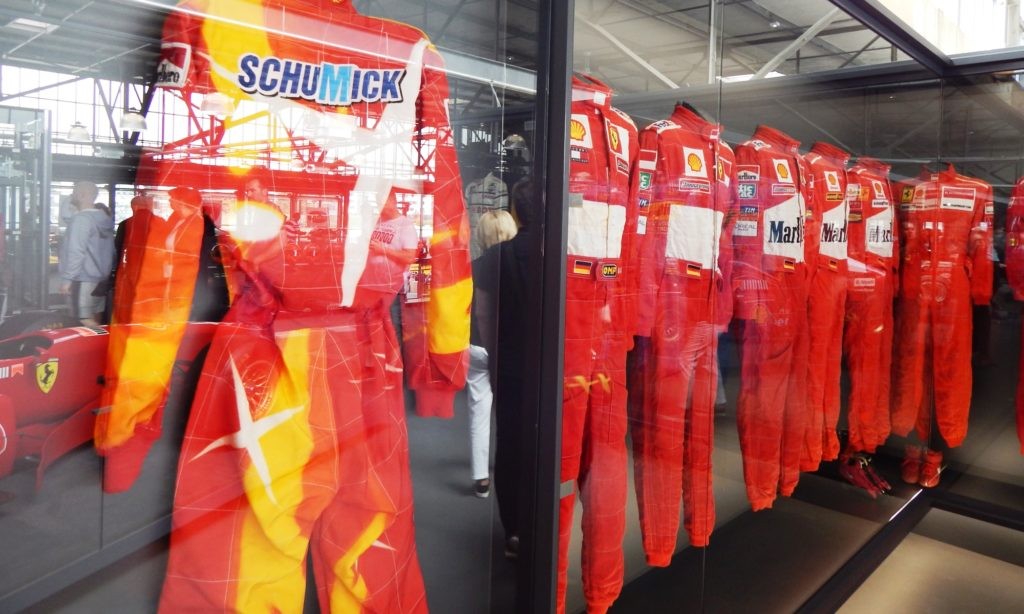 The collection features trophies, helmets and these racesuits. We have no doubt that the bulk of these are champagne-soaked from podium celebrations. 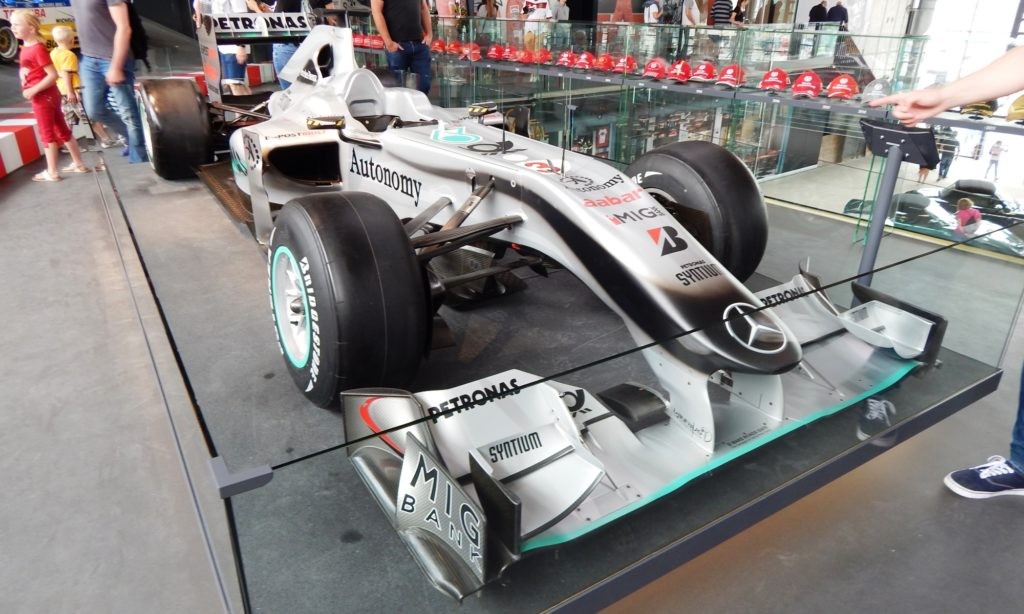 It seems only fitting that Schumacher ended his F1 career with Mercedes. After a brief sabbatical, the German returned to F1 for a three-year stint. He was not as successful in his return but rather laid the groundwork for Hamilton and Rosberg who have won multiple titles for Mercedes-AMG F1