The world of gaming and online racing has taken on a new level of professionalism and is viewed with seriousness by all and sundry. This is made clear by the number of automakers that have developed cars especially for the virtual world. Cars such as the Jaguar Vision GT Coupe and the McLaren BC-03. Now, Lamborghini joins the fray with the Lambo V12 Vision GT.

Lamborghini unveiled the Lambo V12 Vision GT at the GT Sport Nations Cup World Finals in Monaco last night. The wild-looking model is described as a highly visionary concept, emphasizing ‘fun to drive’ within the digital environment of the iconic racing game Gran Turismo. It will be virtually available for racers to try out from 2020.

The Lambo V12 Vision GT is a single-seater, which uses the powertrain from the recently launched, limited-edition Lamborghini Sián. Incidentally, Sian is the company’s first hybrid model and its most powerful car built to date. This means that it uses a 6,5-litre naturally aspirated V12 that combines with a mild hybrid system for a total output system output of 602 kW. Lamborghini says the Sian’s performance figures are 0 to 100 km/h in less than 2,8 seconds with a top speed of over 350 km/h. Expect the Lambo V12 Vision GT to be even quicker.

You can see several design cues that have been carried over from the Sian to the virtual racer.  The design builds on historic Lamborghini design DNA and also incorporates sophisticated aerodynamics. A large wing housing a significant Y-taillight dominates the rear. The main body is disconnected from the fenders, and the hexagon-inspired theme in the side windows is inspired by the Lamborghini Marzal from 1968. The Lambo V12 Vision GT uses the Lamborghini Y-signature for both front lights and rear lights. 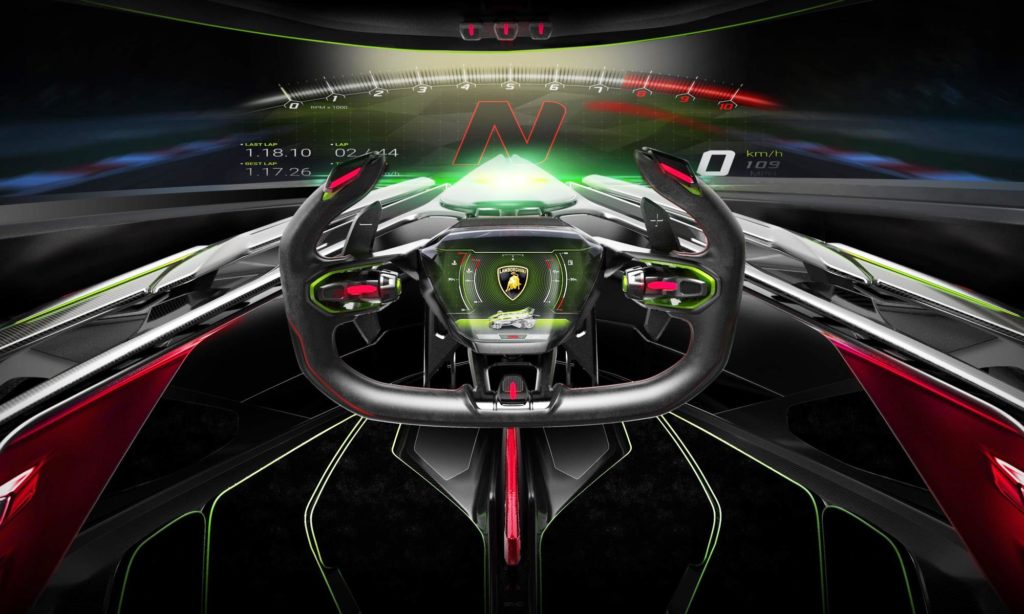 The driver enters the cockpit like a jet fighter pilot, from the front of the car. The main driving controls are located within the futuristic steering wheel and all driver information is projected virtually in front of the driver.

Stefano Domenicali, chairman and CEO of Automobili Lamborghini S.p.A. comments: “Lamborghini is a very young brand, and this is why we are here today to present our newest virtual vision in the form of a real model, with a highly futuristic and cool design to be enjoyed by the young generation of racing game and super sports car enthusiasts.”

“The Lambo V12 Vision Gran Turismo is created to provide the ultimate virtual car for young fans and gamers, who are ultra-enthusiastic about Lamborghini and its futuristic aspirations,” said Mitja Borkert, head of Lamborghini Centro Stile. ”It is an opportunity for the design talent within Lamborghini to stretch its wings and visualize a car that, like every Lamborghini, is a head-turner and the best driving experience, but also mirrors Lamborghini’s push on future technologies, particularly in the arena of lightweight materials and hybridization.”