When the Santa Fe was first introduced into the local context, it was a completely new prospect from the ground up. It boasted the company’s new family face with slit-like daylight running lamps (DRLs) as you can see here in our launch report from a few years ago.

This revised Hyundai Santa Fe is based on that car, but with a few notable changes. The most obvious is a much larger and pronounced central air intake on the nose. Hyundai has taken the same approach as BMW did with the M3, that bigger is better. A new T-shaped graphic has been employed for the DRLs.  Other stylistic changes include different taillamps that are connected by a body-wide light bar and a new style of alloy wheel.

The changes continue inside the roomy cabin, which has seven seats as standard, with a new console. Hyundai describes it as a ‘floating console’ as it has storage underneath. The new console also has wireless charging as well as multiple USB ports and cupholders.

Atop the facia is a 10,25-inch touchscreen infotainment system that features Android Auto and Apple CarPlay mirror link connectivity. Interesting Hyundai has done away with a traditional gear lever with the automatic transmission options accessed by large push buttons. 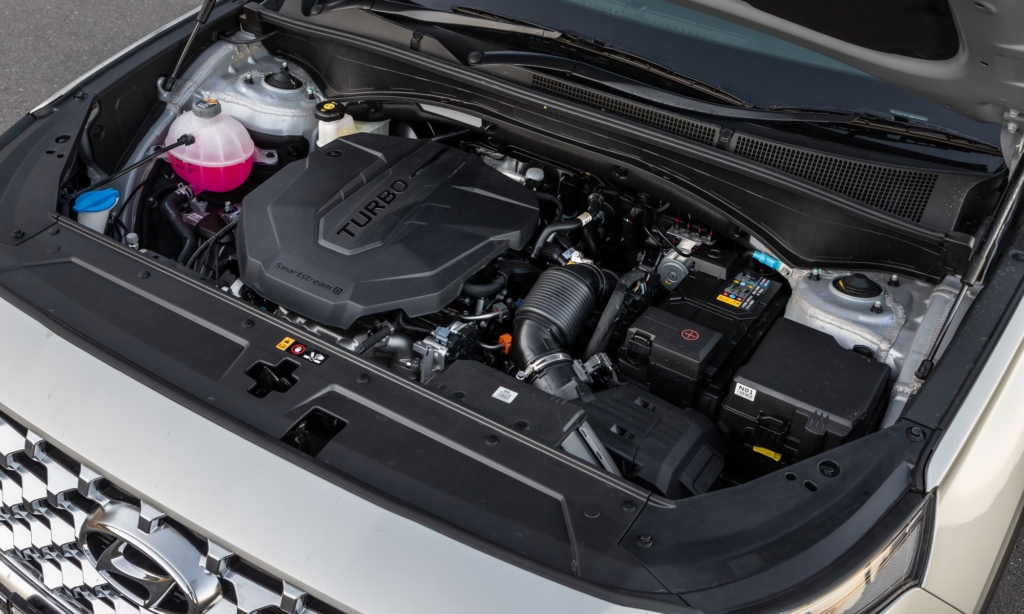 Hyundai SA previously offered three derivatives of the Santa Fe. That has been slimmed down to just two options now: Executive and Elite. Both variants are powered by the same 2,2-litre turbodiesel engine. It may be similar in displacement to the outgoing unit but this is an all-new engine.

The new unit features an aluminium head and block. Other changes include ceramic glow plugs, a new turbocharger, belt drive for accessories and higher fuel pressure, among others. Peak outputs are 148 kW with 440 N.m of torque. Another update for the revised Hyundai Santa Fe is the adoption of a new eight-speed dual-clutch transmission in place of the old torque converter unit. In Executive versions the transmission is connected solely to the front wheels. In Elite derivatives power is channeled to all four corners.

On the car’s national media ride and drive event we drove both derivatives of the revised Hyundai Santa Fe in the Western Cape. Hyundai SA took the smart decision to incorporate a long section of gravel road into the route. On the paved roads we were extremely impressed with the ride quality, and that initial impression was underlined on the farm tracks we experienced later.

Power delivery from the turbodiesel motor is plentiful and with eight ratios the transmission can exploit the relatively narrow powerband. 440 N.m is quite a bit of torque and you can easily feel the steering wheel wriggle in one’s hands in the FWD version. That sensation is completely dulled in the AWD Elite.

Hyundai SA built its reputation on value-for-money sedans such as the Accent and Elantra. As of 2021 the local subsidiary will not offer a single sedan on the new car sales listings. Since the early days the Korean company has transitioned to offering SUVs to suit just about every taste and budget.

The Santa Fe is a great prospect at the top of the company’s local line-up. It has an extremely high level of standard specification, a capable powertrain and supple ride. For those who choose to look beyond any badge snobbery they will find a car that is more than a match for some of the rivals at this price point.