Earlier this week we brought you news of the record year of sales McLaren Automotive registered in 2018. Now we have full details of Porsche record sales in 2018.

The Stuttgart-based sports car manufacturer delivered an incredible 256 255 vehicles worldwide in 2018. That is the highest single-year sales figure recorded in marques’ history. That figure represents a growth of four per cent compared the previous high for Porsche, which was in 2017.

Top seller for the brand was the Macan SUV with just over 86 000 units sold. Though that figure represents an 11 per cent drop in sales. Second place on the list was the Cayenne with 71 458 units sold, a 12 per cent hike.

Porsche Panamera recorded the strongest percentage growth with a 38 per cent increase to 38 443 deliveries. The 911 also recorded a 10 per cent rise, up to 35 573 vehicles, even though it was on run-out. The new generation 911 was launched late last year.

The Chinese market held on to top spot for deliveries again in 2018. Growth in this market hit twelve per cent amounting to 80 108 units in total. In second place was the USA, with an increase of three per cent to 57 202 vehicles. Deliveries in Europe came in slightly below the previous year’s figures.

“The 911 capacity to fascinate is stronger than ever,” comments Detlev von Platen, member of the executive board responsible for sales and marketing at Porsche AG. “We just celebrated the world premiere of the new 911 at the end of the year at the Los Angeles Autoshow, and yet our sports car icon once again inspired more customers in 2018 than in the previous year.” 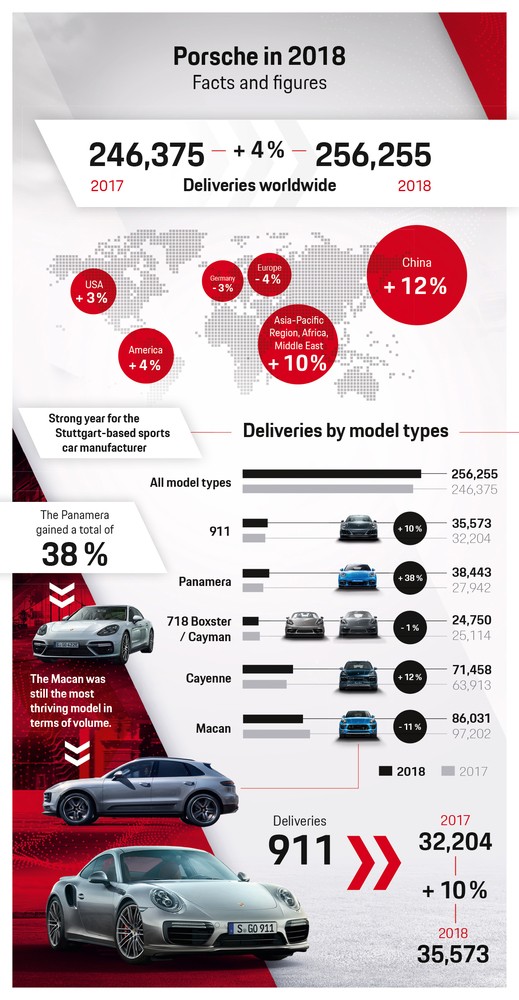