Ferrari makes good money from selling limited-edition versions of its already desirable cars. As production volumes increase the uber-wealthy want something that others cannot buy, unless they too have excessive levels of wealth (click here to learn more about special edition Ferraris). The latest example of this is the limited edition Ferrari 812 Competizione twins that broke cover today.

The limited edition Ferrari 812 Competizione was shown by the Italian supercar maker a few weeks ago, although the official debut was today (we don’t understand this roll-out strategy either). This latest front-engined V12 model will follow in the footsteps of the 599 GTO and F12 TDF.

Read our driving review of the iconic Ferrari F40 by clicking here.

The press material says: The new model is the ultimate expression of Ferrari’s concept of an extreme front-engined berlinetta, honing the characteristics of the critically-acclaimed 812 Superfast to a level never seen before. The result is a car that encapsulates and epitomises the company’s 70-plus years of experience on the world’s circuits, drawing on its thoroughbred sports car DNA to deliver a perfect marriage of performance, form, and function. Aimed at Ferrari’s most passionate collectors and connoisseurs, it features numerous uncompromising engineering solutions to guarantee peerless driving pleasure.

The company’s naturally aspirated 6,5-litre V12 spins to a dizzying 9 500 r/min, 1 000 over the regular 812 SuperFast (read our driving review here). This higher engine speed is the result of adopting titanium conrods that are 40 per cent lighter than steel versions and a crankshaft that is 3 per cent lighter as well. The high-revving motor produces 610 kW, which is the highest of any Ferrari ICE. That power output reduces the 0-100 km/h acceleration time to 2,85 seconds and makes it the most powerful front-engined V12 to ever leave the gates of Maranello. Peak torque is rated as 692 N.m and top speed is quoted as above 340 km/h.

Ferrari says that the engine uses state-of-the-art materials and that many of the engine’s key components have been revised. Among these is a new valve timing mechanism and a new exhaust system. Other technical upgrades include four wheel steering that is independently controlled on each rear wheel. Massive brakes measure 398 mm at the front and 360 mm on the rear axle. Ferrari has also undertaken to reduce the car’s overall mass compared to the 812 Superfast. To achieve this carbon-fibre has been used extensively both on the exterior and in the cockpit. 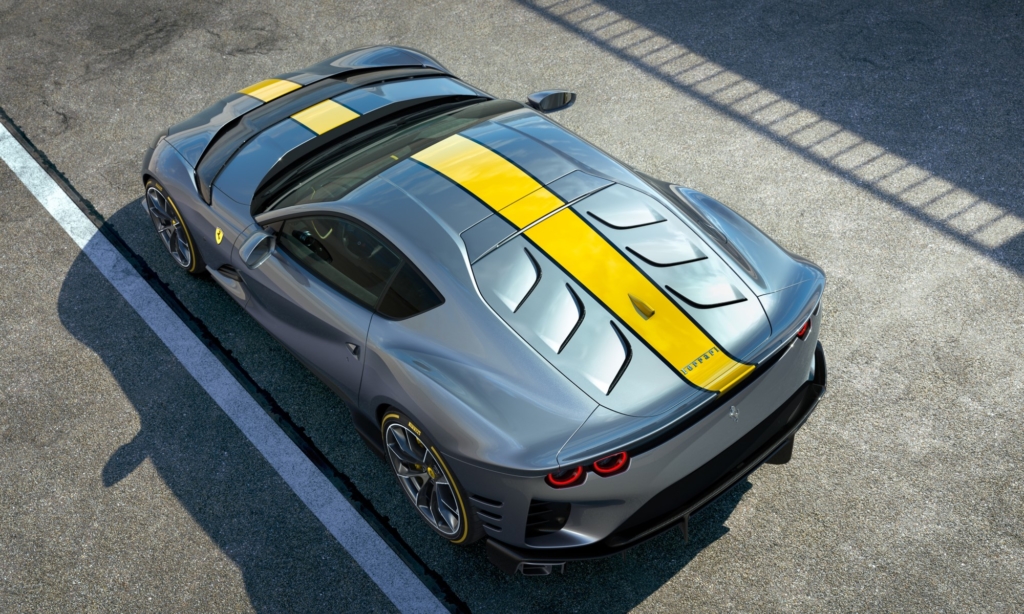 The limited edition Ferrari V12 has an outward appearance that is familiar but not completely similar to the 812. Aerodynamic research has altered the car’s lines, as you can see in the sculpted flanks. The aerodynamic redesign of the whole car was aimed at maximising downforce levels; from the new front air intakes, rear diffuser and exhaust configuration to the patented design of the rear screen. The glass rear screen has been replaced with a single-piece aluminium structure that has vortex generators to improve the car’s aerodynamic efficiency. Even the rear spoiler is higher which helps make the tail look very wide.

On the very same day that the Ferrari 812 Competizione was shown in action (see video below), an open-top Aperta or Ferrari 812 Competizione A version was also shown. This version is near identical to its fixed-head counterpart. A small roof panel can be removed and stored in the luggage compartment without losing any space. Ferrari’s aero team has also incorporated a discrete spoiler into the rear section of the body work.