BMW SA loaned us a BMW X3 Competition to drive for a few days. We sampled the first M-developed X3 over a wide variety of roads around the Western Cape and report here.

BMW’s M division first turned its attention to the larger X5 models as a way to increase its range of offerings. (Read our BMW X5 M50d driving review here.) Now, for the very first time, they have M-powered (sorry, we won’t do it again) the X3. In the South African context there are a range of petrol and diesel-powered derivatives that comprise the X3 line-up. At the very top of the family tree sits the BMW X3M Competition. 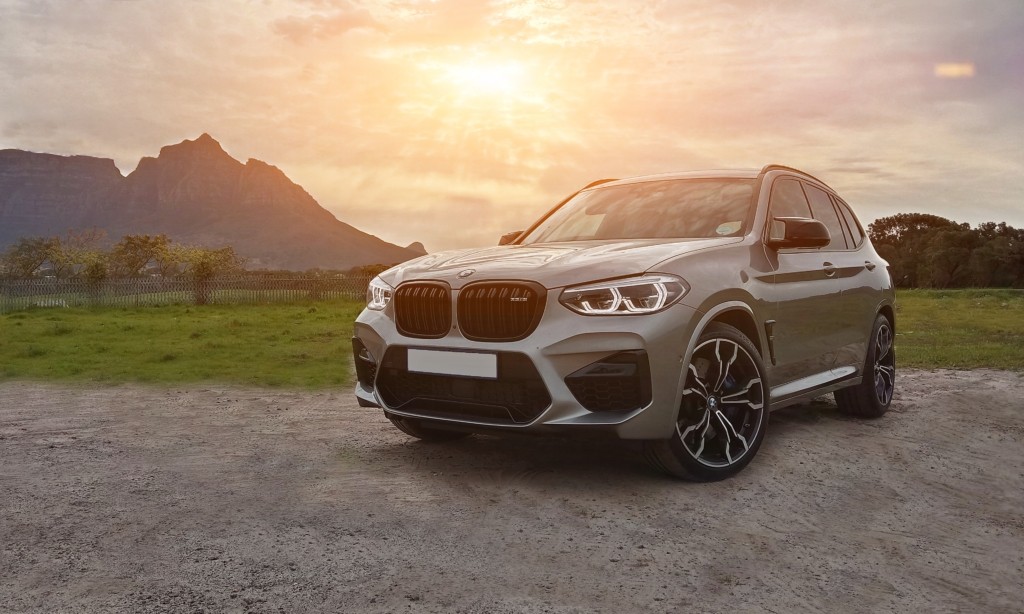 Starting with a regular X3, M Division makes a raft of changes to the model’s appearance to give it the requisite level of menace and sportiness. The new appearance starts with a reshaped front bumper that has sculpted air inlets and a set of kidney grilles finished in black chrome. The standard LED headlamps create a modern and premium appearance.

Viewed in profile we see a more hunkered-down ride height, larger (21-inch) alloys that cover massive brakes with multi-piston calipers, faux vents on the front fenders and M-specific mirrors. At the rear there are quad exhaust outlets, a small diffuser and a more pronounced roof spoiler. In case anyone didn’t get the message there are ‘M’ badges on the front, sides and rear of the body.

The M treatment continues into the cabin where there are lashings of carbon-fibre contrasted by soft leathers. In our test unit the trim featured a two-tone treatment with dark beige offset against black. Front occupants are cosseted by figure-hugging seats with illuminated M badges. Taking centre stage for the driver is fat-rimmed M-specific steering wheel. The X3M has M1 and M2 buttons highlighted in red, much like other modern M cars, to preset the driver’s favourite modes for quick recall. Close at hand is a chunky M gear shifter with shift-speed selection. All instruments are digital in nature and specific to the X3M. Alongside the cluster is BMW’s latest generation iDrive touchscreen infotainment interface.

Biggest of all the changes in the X3M Competition is, fittingly, reserved for the powerplant. The newly developed power unit, dubbed S58, is an inline six with two mono-scroll turbochargers. It is the most powerful series production six-cylinder built by BMW. It cranks out 375 kW and a whopping 600 N.m of torque. At those numbers it already outstrips the outgoing M3/M4. Incidentally, this is the very same engine that will be slotted into the M3/M4 twins (as we outlined in this article). The best part is that this is just the starting point, expect more hard-core versions of the sporting coupe to offer north of 400 kW.

But back to the X3M competition… the motor fires with a throaty flare of revs and settles into a gargley idle when cold. The standard sports exhaust’s deep burble gives one a slight indication of the power it is capable of unleashing. In its most comfortable mode the sporting SUV is just about as forgiving and easy-going as any of its siblings. The large alloys on relatively low-profile rubber do make their presence known, but only over sharp road ridges. The eight-speed automatic transmission shuffles seamlessly between ratios using the deep well of torque to make progress. We used the X3M Competition in and around the city for a few days in this way, and were it not for the badges, no one would know of its true potential.

But we weren’t simply going to use such a model in and around the city to bring you a decent review. We headed away from Cape Town to let the X3M stretch its legs over a wide assortment of road conditions and types.

Once into the more entertaining (read: twistier) sections of road we ramped up the driving modes from their comfort to most sporty settings. In this setting the throttle response feels more urgent and gearshifts are delivered with more immediacy.  The driver even has full control of the transmission and it won’t shift up even at the red line, which is great. The X3M Comp can be thrown around in much the same way as a hot hatch, such are the levels of grip and composure. The drivetrain has a RWD bias option for those who enjoy the sensations of a car that can be steered from the rear axle. This mode is ideal in tighter corners.  When really pushing on you can even sense the active differential moving power across the rear axle to rotate the car, which is a great feeling.

Check out a custom-built BMW M4 Estate at this link.

To really exploit the M car’s engine, however, one needs a proper B-road, the kind that isn’t always in the best condition, but still offers a chance to wring out the engine; and what a motor it is. Although peak torque is available from 2 600 r/min, the engine will eagerly rev to 7 000 r/min. And it emits that famous inline-six howl while doing so – cool! The X3M Competition devoured the mountain roads of the Overberg region. During the drive we could also feel the extra bracing applied to the body-in-white. We suspect that most drivers would drive this car quicker over any piece of ground than they would the edgier M3, which says a lot.

If there is one area of its dynamic repertoire that didn’t sit well with us it’s the X3M’s inert steering action. When tackling corners at speed one really needs accurate feedback of grip levels on the front wheels, which isn’t the case here. Swapping between steering modes adds heft, but no more feel to the helm. On the whole the X3M Competition feels like a properly engineered M-car. Sure, it is an SUV but it feels shot-through with the same level of focus and engineering know-how that we’ve become accustomed to from the M Division.

BMW was vilified when the company’s in-house tuning arm started to apply its special treatment to the company’s SUVs. Purists, who were already reeling from the loss of naturally aspirated engines, were now faced with high-riding M cars… err, SUVs making up a large chunk of the department’s portfolio. If critics were to ever drive the BMW X3M Competition they’d quickly reel in some of that criticism. The X3M sounds, goes and handles up there with the best sporting SUVs from other brands. It’s not simply an SUV with an abundance of power than can’t be safely utilised, the M Division’s and influence can be felt in its very nature, which we applaud.