Earlier this year Bentley set a record up the famous Pikes Peak Hillclimb course. Rhys Millen drove a W12-powered Continental GT through the 156-turn course in just 10 min 18,4 seconds. That run made it the fastest production car ever at Pikes Peak. You can view highlights of the run at the bottom of this post. This week Bentley announced that is has created the Continental GT Limited Edition to celebrate its record-breaking run.

Bentley also set a record at the event in 2018, which you can read about here.

Check out the Bentley EXP 100 created to celebrate the marque’s centenary. 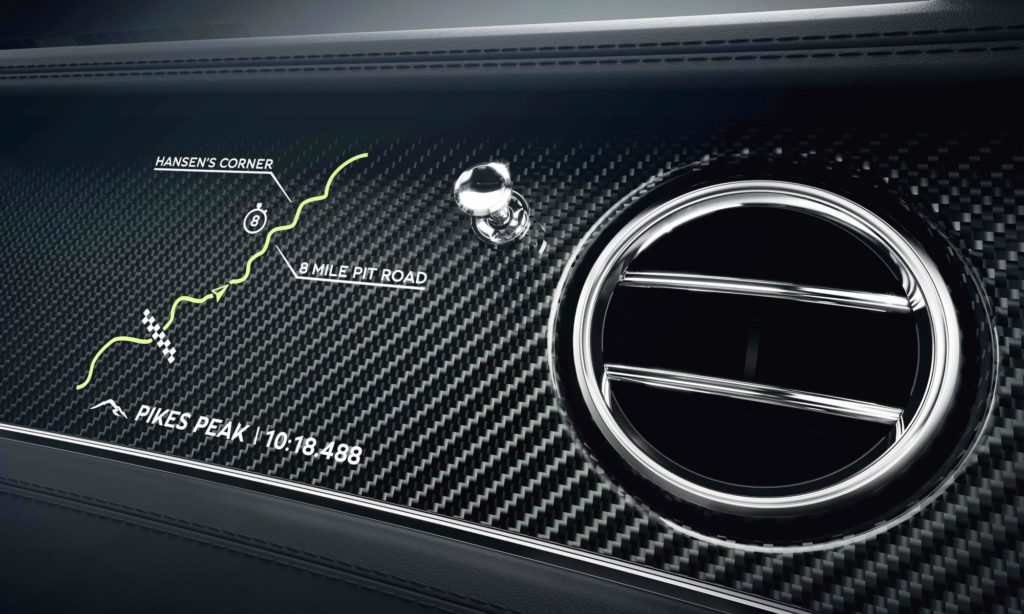 In the cabin, Alcantara with contrasting thread stitching adorns much of the trim. The steering wheel features honeycomb stitching and a centre stripe both in Radium, as per the Pikes Peak GT racecar. Carbon-fibre is used liberally adding to the sporting theme. Passengers are faced with a graphic showing a section of the Pikes Peak track and the record-setting time. Pikes Peak embroidery to the seat headrests, Pikes Peak treadplates are other reminders.

The Continental GT Limited Edition features the same twin-turbocharged Bentley W12 petrol engine as used in the Pikes Peak run. This engine develops 460 kW and a mammoth 900 N.m of torque. These figures allow the Continental GT to accelerate from 0-100 km/h in 3,7 seconds, with a top speed of 333 km/h.

Chris Craft, member of the board for sales, marketing and aftersales at Bentley Motors, said: “The new Limited Edition Continental GT is distinguished by a number of carefully curated features to honour that outstanding record run. It reflects Bentley’s spirit of endeavour, one that has been a constant throughout the last 100 years and remains at the beating heart of the company.”